“Near as I can figure, this happened in 1996. I’ve managed to pin down the date that far. I feel like it happened in the spring or summer, since I remember wearing a pair of shorts, but one of my great regrets is not recording the actual date of the event.

After you hear the story, you’d think it would be something you’d never forget. But given enough time between, not the case. My memory, while good, isn’t quite eidetic.

I had gone down to the former site of Camalott Communications, one of the area’s original Internet providers, to pay my bill. At the time, Camalott was located on North 1st Street, near the movie theater, in the shadow of what is now Chase, then Bank One.

I was using the light of the theater’s marquee to write out my check, which I planned to put in Camalott’s night drop-slot. Involved in my work, I never heard them approach.

There was a knock on my driver’s side window. Two young boys, somewhere between nine to 12 years old and dressed in hooded pullovers, stood outside.

I cracked the window a bit, anticipating a spiel for money, but I was immediately gripped by an incomprehensible, soul-wracking fear. I had no idea why.

A conversation ensued between one boy, a somewhat suave, olive-skinned, curly-headed young man, and myself. The other, a redheaded, pale-skinned, freckled young man, stayed in the background.

The “spokesman,” as I’ve come to think of him, told me that he and his companion needed a ride. They wanted to see a movie, “Mortal Kombat,” but they had left their money at their mother’s house. Could I give them a ride?

Plausible enough. But all throughout this exchange, the irrational fear continued and grew. I had no reason to be frightened of these two boys, but I was. Terribly.

After a bit more conversation, I looked up at the theater marquee and down at the digital clock display in my car.

Mortal Kombat’s last show of the night had already started. By the time I could have driven the boys anywhere and back, it would practically have been over.

All the while, the spokesman uttered assurances:

They were just two little kids.

They didn’t have a gun or anything.

The last part was a bit unnerving. 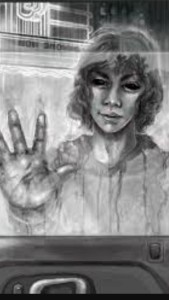 I noticed that my hand had strayed toward the lock on my door. I pulled it away, perhaps a bit too violently.

In the short time I had broken the gaze of the spokesman, something had changed, and my mind exploded in a vortex of all-consuming terror.

Both boys stared at me with coal-black eyes. The sort of eyes one sees these days on aliens or bargain-basement vampires on late night television. Soulless orbs like two great swathes of starless night.

I did what I feel any rational person would do. I full-on freaked out inside while trying to appear completely sane and calm.

I apologized to the kids. I made whatever excuses came to mind, all of them designed to get me the hell out of there. Fast. The aura of fear was now a palpable, black-hanging thing, almost as if reality itself was warping around me.

I wrapped my hand around the gearshift, threw the car into reverse and began to roll up the window, apologizing all the while.

My fear must have been evident. The boy in the back wore a look of confusion. The spokesman banged sharply on the window as I rolled it up. His words, full of anger, echo in my mind even today:

I drove out of the parking lot in blind fear, and I’m surprised I didn’t sideswipe a car or two along the way. I stole a quick look in my rearview mirror before peeling out into the night. The boys were gone. Even if they had run, I don’t believe there was anyplace they could have hidden from view that quickly.”