This story is about my father and his encounter with a flying being / humanoid in the South Texas county of Hidalgo.  He worked for the sheriff’s department for a number of years.

My father has investigated over 14 homicides, he has had his fair share of experience and has “been around” as they say.  Anyway, this is the story he would tell my family and I, told from my father’s POV :

“A late December night.. while driving down the old Military highway after being called by a citizen saying his chickens had been being slaughtered more and more every day, I couldn’t help but notice how dark La Lomita looked as I pulled closer and closer to the old asylum, near where the man lived who called to make a report.

As I arrived and got down from my unit, the man tells me he has heard weird sounding noises throughout the night and he wakes up to tools missing and his chickens being killed and eaten, with nothing but heads and feathers being left behind.

Now, the man did mention that he does have wild dogs and boars walking around at all hours of the night.  However, they can never get into his chicken coops and garage door, so he was assuming some one had been breaking in and taking his belongings and killing his chicken to eat/cook them.” 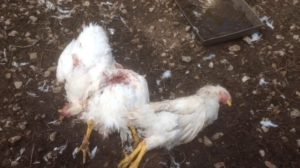 (Now, this wouldn’t be strange if the man had neighbors or homeless people living around, but this is out in the middle of nowhere.  My father patrolled in the mid 90’s, Military Highway was nothing but orchards and woods so it was strange that someone would go out of their way to come to this man’s house and harass him.)

“As I was writing his details and statements, I notice that there is a wired window busted in his chicken coop.  I looked around and came to the conclusion that whomever got into the coop entered through the window first, then opened the coop from the inside.

I thought this particular action was strange.  What would have fit through that window?  It was no more than 2ft × 2ft and was 5 feet high from the ground, no way for them to climb up easily either.  No markings of any objects being placed for extra height.  No signs of any other strange behavior.  Except for the 8 slaughtered chicken heads that were laying just outside the chicken coop while the other chickens slept.

Well, by the time I was done taking the report, it must have been around 11:30 pm at night.  I tell the man to keep in touch and gave him my personal pager number if he had any other strange incidences and promised I would look into it and patrol the area from now on.

As I opened the door to enter my unit, the man tells me there is one more thing, he has heard thumping on his roof as well every morning that he has woken up to (4 am) for the same number of days that the chickens had been killed.  I took this into consideration since there are some large carnivorous beasts in South Texas that can tear a wire window open.  I thought to myself, “but how could the door have gotten open to the coop?”

Well, I shook it off and tried not to pay too much mind to it since I was working on 3 other more important cases at the time.  I turn on my unit and turn on the radio, roll down the window and start to drive away heading down the legendary Military Highway once again. 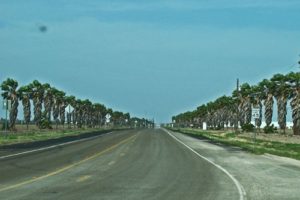 Pitch black dark, not a light post in sight…I loved driving like that at night, so peaceful and relaxing.  After a long night, midnight came.  My shift was over.  I was dreaming of sleep when all of a sudden I hear a loud swoosh that startled me, right near my ear towards the open window of my unit.

I was hitting 60 at least so I didn’t pay any attention to it, probably just the wind, you know?   As I get closer to La Lomita again, I see something through the corner of my left eye, something large floating near my unit as I’m hitting 60 mph.  I thought to myself, “it must be some sort of reflection or tree-lining that I’m driving near.”

Then again I hear the “swoosh” and in an instant the figure is gone… i tried my best not to look since it was pitch black and i was driving quite fast, didn’t want to take my eyes off the road.  The scary part is i didn’t have to.

As I slow down pulling up to the only stop light within a 2 mile radius, I see the figure again fly ahead of my unit!  Quickly, I thought to myself, “what a huge owl!!!”  My first assumption.  I was wrong though.  As i got to the red light, the being flies down quickly about 40 yards in front of my unit, and stands on its two hind legs.

It was a four legged creature.  As it lands, it turns it’s back towards my unit and quickly jumps up and down twice, as if trying to get my attention.  Not knowing what exactly it was, I hesitated to get down. I didn’t even think about it.  Whatever this thing was, it was so bizarre and strange looking it looked about the size of a full grown pelican, with brownish-dark wings and body, claws on it’s front legs.

From what I could see it had a dog like snout, I didn’t get to see any teeth, it flew away within about 8 seconds as the light turned green. Being freaked out, I rolled up the window and lowered my radio.  I tried to tell myself that it was just a bird.  It was no bird.  It was too large and heavy looking to be a bird.  Plus no beak and 4 legs.  For years I have heard of strange reports and sightings along Military Highway ever since that one night.” -Anonymous

Sounds like this could be related to the infamous creature known as the chupacabra.   What do you think?