My cousin and I experienced this paranormal activity in Harlingen in late November 2014. It’s an event that we have shared with our family and have never been able to explain. It was an eerie experience that has luckily never occurred again, but it is also something that we can’t get our mind off of and can’t seem to understand.

One night the lights went out, we lit candles and sat in the living room for about 20 minutes before my cousin decided it would be a good idea to play hide and seek (something we always did whenever we were bored). I didn’t want to play because I was afraid of the dark. That’s when we opted for me using a candle. As soon as I grabbed a candle my cousin was gone. I was scared to say the least. 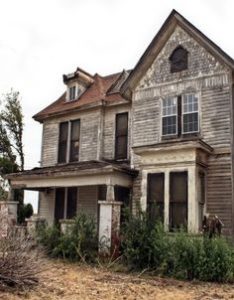 We had been playing for about roughly five minutes and I had yet to move. I was scared, but decided that I might as well play or I’d never hear the end of it. I began walking around the house. That’s when I felt it. There was a gust of wind and as I turned I noticed the front door was open. I walked up slowly to the door to shut it and when I did, the candle went out. I started panicking and rushed back to the living room. The entire house was dark. All the candles we had previously lit had mysteriously gone out. I began looking for the lighter hectically and lit the candle again once I found it. I called out for my cousin, but I got no reply. 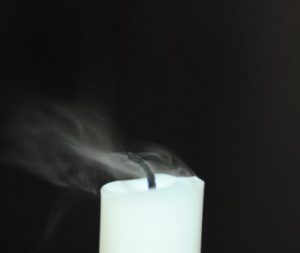 That’s when I felt another gust of wind and noticed the door was open again. I started freaking out because the chance of the door opening again after I shut it was extremely slim. As I approached the door hesitantly, I noticed the silhouette of a tall and lanky figure on my front porch. My eyes were fixated on this figure and that’s when I heard my cousin’s voice, “Close the door. The power is out and it’s already cold enough.” She came dashing forward with a flashlight and slammed the door shut. “No, wait! There’s something outside….. or someone I think”, I exclaimed. We cautiously crept towards the door frightened of what lurked behind. We slowly opened the door to find nothing or no one. How was it possible? My cousin looked at me like I was insane. We closed the door and walked back to the living room. I began to think that everything I saw was just me being paranoid about being in the dark with only a candle as a source of light. 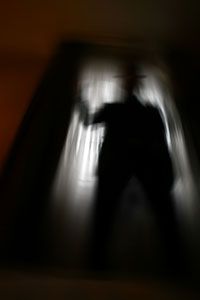 As we sat on the couch, we started to talk about anything and everything besides what I had seen. I kept the candle and flashlight in reach not wanting to be in the dark. When suddenly there was a loud thud that came from upstairs. Me and my cousin looked at one another simultaneously. “Something probably just fell over. Let’s go check it out.” my cousin said. We both stood up and made our way to the stairs. As we stood in front of the steps I began to feel reluctant and said “You’re right something just fell, let’s wait for my parents to get home before we go up there.” My cousin refused to listen to me and began climbing up the steps. We searched all three rooms upstairs and saw nothing out of the ordinary. I still felt scared.

We decided to just head back down to the living room. All of a sudden, we saw the same lanky figure standing at the bottom of the stairs. We scram in unison. In an instant, it had vanished. My cousin rushed down the stairs, and I followed her. When we reached the bottom of the stairs we noticed the door was wide open. We apprehensively approached the door and my cousin frantically shone the light into the dark night trying to catch a glimpse of the mysterious figure. 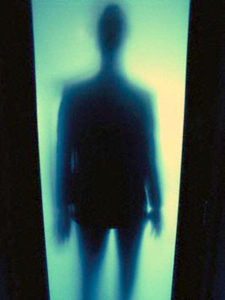 The flashlight my cousin was using began flickering. It is then we saw the same silhouette at a distance, which appeared to be a tall man with red glowing eyes. Our piercing yell rang through the house as my cousin and I witnessed what was before us. Our source of light had then gone out. My cousin began desperately banging the flashlight against the palm of her hand trying to regain the light. Once it turned on, she shone the light again to be met with nothing. The man had disappeared. “He’s gone”, I said. The split second I uttered those words, the lights in the house came back on, and we noticed my parent’s headlights pulling into the driveway.

We can’t explain the strange phenomenon that occurred that night, and I don’t think we’ll ever be able to.

Sent in by:  Anonymous