Ever heard of Santa Muerte?  The beloved goddess of Death

Shrouded in a veil of secrecy as murky as its signature black cloak, the identity of the owner of an oddly-placed 3-feet-high statue of the Santisima Muerte in the middle of the San Benito Municipal Cemetery has become somewhat of a mystery.
On Thursday, two local women, who we’ll call Samantha and Sarah, expressed concern with the statue and called its presence “disrespectful” to the departed whose final resting places are located in the vicinity of where the porcelain folk figure – or Santa Muerte as it’s more commonly referred to in the Rio Grande Valley and elsewhere – was placed. 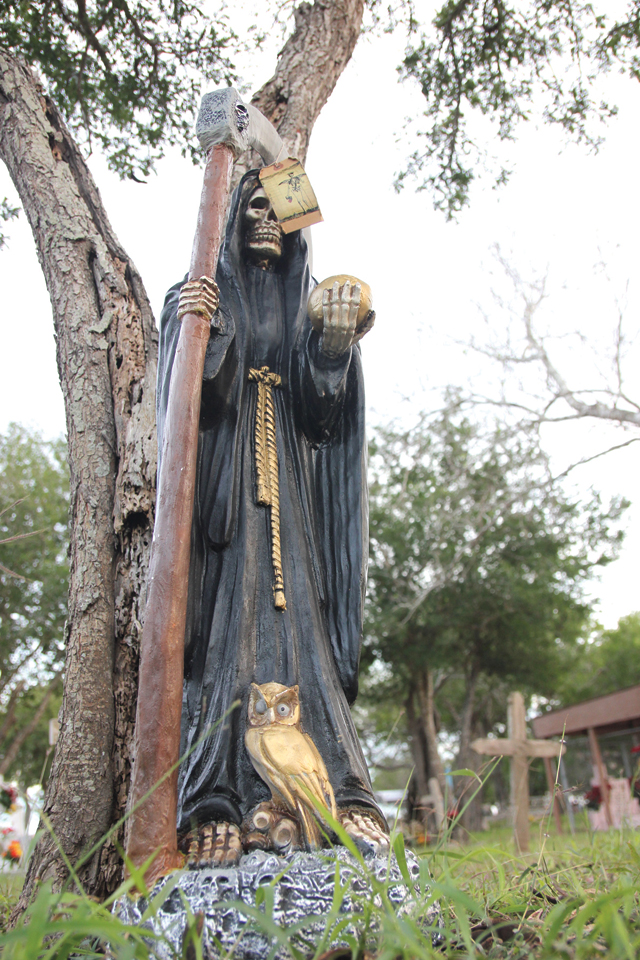 The statue depicts Death atop a crushed pile of skulls, cloaked in black and wielding a bronze globe in its left hand and a scythe in its right. Two incense sticks were found inside the sculpture, one within the globe that was visible through a gaping hole and another inside the base, which appeared to have been broken to gain access. It’s also accompanied by a bronze owl perched near the base and a tag tied to the scythe that displays a crowned Winged Death dangling a heart from a string.
“I noticed the statue on Monday (January 14) when I came to visit my mom’s grave,” said 61-year-old Samantha. “First of all, a statue like this shouldn’t be placed at a city cemetery. Whoever it belongs to should have a little more respect for our loved ones and the other people who are buried here.”
Samantha said she initially recalled the statue located beside a tree near a path which cuts through the cemetery. On Wednesday, Samantha said she returned to the cemetery and noticed that the statue had been moved directly underneath the tree and closer to the path.
“I don’t have anything against people who worship that statue, just not here at our city cemetery,” Samantha said. “It is disrespectful to our loved ones.”
Fifty-nine year-old Sarah of San Benito agreed.

“I’m not scared of it, it doesn’t bother me at all because I’m into a lot of prayer,” Sarah said while motioning to the statue. “It doesn’t faze me, but it is still being disrespectful to these people. I’m pretty sure that most of the people who are here are Catholic. For someone to come and put that here is very disrespectful.”
Sarah said she’s been in contact with officials from the City of San Benito and the San Benito Police Department to have the statue removed.
“We called the city, and they said that it shouldn’t be here, but the police said that they couldn’t do anything about it,” Sarah said. “I hope they do remove it or whoever owns it should come for it and put it at their house. Not here.”
According to City Manager Manuel Lara, complaints about the statue had previously not been brought to his attention, but he agreed that it should be removed if no one claims it.
“I hadn’t heard anything about it; I haven’t heard anything from the staff either,” Lara said. “If I have complaints, and it is not placed on a burial site that is identified, then of course (it’ll be removed). I’ll get my staff together to see if we can identify if it’s on a burial site. We’ll try to contact whomever we might be able to get in touch with on that burial site and see if they have placed it there. If someone else has placed it there, then we can have it removed at the request of the community.”
Dr. Antonio N. Zavaleta, a professor of anthropology at the University of Texas at Brownsville and renowned expert on the occult, believes the statue’s purpose is malicious in nature.
“It’s definitely being used in a work of witchcraft, probably a spell to harm or kill someone,” Zavaleta stated via email correspondence after viewing photos of the statue.
A student of folk religion and border cults for over 40 years, during which time he’s authored and co-authored a number of published books ranging in subjects from curanderos to a comprehensive history of the Rio Grande Valley, Zavaleta has aided authorities from all over the country in identifying and understanding ritualistic crimes. In fact, Zavaleta said he’s been asked to serve as an expert witness in cases in New Mexico, Arizona, California, Washington, D.C., Miami, Florida and Chicago, Illinois.
Regarding the statue’s imagery, and considering his expertise, Zavaleta felt confident in identifying the tag as showing that Death has claimed a life. “The whole thing is fascinating,” the professor further remarked.
Zavaleta said the owl is also a clear indication of brujeria, or witchcraft. “It’s a búho, or lechuza – a classic symbol of the witch, and the owl is the witch that takes the form of a person in Mexican-American culture and literally flies to the place where the spell is to be cast, where the harm is to be done to the person. It’s part of a spell and it definitely has a significance, I just have to look at it.”
The professor did just that on Friday when he accompanied San Benito News reporters to the cemetery to take a closer look. Afterwards, Zavaleta estimated the sculpture’s worth to be in the vicinity of $100 to $200. Also, Zavaleta believes the statue is the work of someone who paid a witch to inflict harm on another person.
“Someone, a man or woman, is doing witchcraft for pay,” Zavaleta said. “Somebody has paid the witch; they don’t do it for free and it (witchcraft) could easily go for a couple thousand dollars. So it definitely needs to be removed. The city should remove it, and that should be the end of it.”
Actually, Zavaleta said the best course of action may even be to burn the sculpture. The city manager said he’s already notified his staff of the statue and is currently determining an appropriate means of disposal, which may not occur until after this weekend.
“You see this on TV or in motion pictures, but not here in San Benito,” Lara said. “Our communication regarding the cemetery is to make sure that it’s cleaned up, that they pick up the trash, make sure the grass is mowed and manicured. We just want the people of the community to be proud of the burial sites that they have for their loved ones.”
Identifying the worshiping of Santa Muerte and its use in witchcraft as a fairly new phenomenon, Zavaleta said there are many who have common misconceptions regarding its practice.
“It’s not a saint,” Zavaleta said of the Santa Muerte figure, of which its roots he traced back to Mexico City during the 1980s. “Some people think it’s a Catholic saint, but it is not. It’s a folk figure. It’s not even a folk saint. It’s only existed for about 30 years… Thirty years ago there was no such thing, and here it is. It’s very popular.”
Given the statue’s ominous nature, which the professor believes is to cause someone’s death, Zavaleta said he was surprised to see it placed near a path not far from the road. “You want that to be clandestine,” he said. “You want it to be hidden; you don’t want it to be found out. They do their best not to be found out.”
Still, this isn’t the first time he’s witnessed such imagery at the city’s cemetery. “There’s been activity here in this cemetery, but to my knowledge it has been a while,” Zavaleta said. “If I were to walk here and study (the cemetery), I could probably uncover some other things, but what for? There’s no purpose in it. These witches, people who practice black magic – especially with Santa Muerte – they’re going to always lay out their work once they’re done with it. They’re going to lay it out in a cemetery.”

The History of The Santa Muerte