For generations of actors from the award winning and highly regarded theatre program of the Pharr-San Juan-Alamo Independent School District, there have been reports of unusual activity ruminating from the campus formerly known as PSJA High School in San Juan, TX.

Students and staff claim to have seen the ghostly apparition of “Fred”, a former janitor, roaming the theater at all hours of the day and night.  Legend has it, “Fred”, died as a result of falling nearly 40 feet from the ceiling of the theater while changing a lighting fixture.

In addition, as part of tradition, theatre  directors always made sure to leave a reserved seat for “Fred” during any production at PSJA High School. 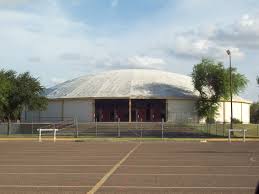 “The old PSJA Auditorium – It has been said that in the old auditorium years ago a janitor or tech was putting up a light on the top and he fell and died.   ill this day if you look up the light has never been replaced.

The story is if you happen to do a production there, you have to put his name in the program because if not he will do something to ruin the show.  Either drop the set, or something else horrid will happen.” – anonymous

Apparently, during a production of “Aladdin”, the stage manager forgot to add his name to the program and a fire broke out on stage during a live performance.

Check out what the former Head Director of Theatre at PSJA High School had to say about his chilling paranormal encounter at the old auditorium.

“As a former theatre director at the old Dome Auditorium, I was frequently the last man out after rehearsals ended.  One night as I was preparing to exit the building I heard footsteps on the stage. Thinking it might be a student who had not left, I jumped on stage and saw a plainly dressed man waking backstage .  I followed him and asked him to identify himself .  He did not turn around but kept walking silently.

The backstage narrows into a small hallway which leads back to the front lobby.  Before reaching the lobby, there is a small janitorial closet . I continued to follow the man who turned and walked into the closet.  By this time I was annoyed, I opened the closet door expecting to have a conversation with a janitor.

As I flung the door open I quickly realized there was no one inside. The man has vanished . Anyone who might have been looking at the theatre from the outside would have seen a side door fly open and would have seen me running out of the building to my car. I directed plays in the dome from 1990 until 1997 and I never saw “Fred” again if that’s who it was.” -Roberto Gomez Jr

How many of you attended the old PSJA High School?  Did “Fred” ever appear to you?  Leave us a comment below.

This site uses Akismet to reduce spam. Learn how your comment data is processed.

The Legend of Sarah Jane Road in Port Neches, Texas

When I was about seven or eight years old I live in Modesto California. I was asleep in my bed…

My family was outside near lufkin texas during the space shuttle of columbia explosion. It shook the ground like an…

Did you take a pic when it stood up

This is correct. The original midget mansion was down the street from lyndies bar back in the day, now it’s…

I've heard of duendes in the area of La Feria and Santa Rosa. There's a website where people write in…

We live in Brownwood, Texas. My 10 year old son as been saying he is saying this in our house,…

I agree. It has become an eyesore. So much potential it has.

It's a shame this little town never got that hotel renovated. I am from San Juan. It could of been…