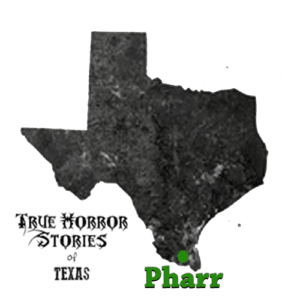 “Let me tell you about the time I played around with the Ouija board. It was shortly after my daughter had passed away. I had heard so many stories about the Ouija Board but had no experience in it. So when my Grandpa died we were cleaning out his house and found a hidden door and in that little space was a Ouija Board and lots of jars filled with silver dollars. I wonder what my grandpa was doing with that. He was probably trying to talk to my grandmother who died before I was born from cancer. I remember when I found the Ouija Board at the house and we brought it home. My dad had hidden it from us but I got a hold of it and kept it hidden away and would play with it by myself and once I ran away from home I took it with me.

My friends and I started playing with it. Not sure if you all remember the old motel The Red Carpet Inn here on Jackson and old 83? Now it’s a Golf Place not sure the name, it’s in Pharr though.

I remember one time I had asked a question and was already connecting with my daughter. I had asked her what I was going to do for a living and how old I was going to be when I died. The Ouija Board told me that I was going to be a drug dealer and then end up in prison and then become famous and I would be dead by 41 but die of natural causes. The 1st part was true I did hustle for a bit and got involved with the wrong side of the law and ended up doing 54 months in Federal Prison and the Famous part has not happened..lots of people do know me or know of me they don’t know my real name the only people who actually know my name are my friends from
school and family but everyone calls me by my other names.. on the dying at 41 hmmm not sure about that right now I do have lots of health issues but I’m living a healthy lifestyle.

You see the thing with knowing your future which means you can also change it. To all those who go get their cards read and the way the lady tells you that your future is going to be and it doesn’t happen that way, that’s because you are now aware of your future and remember we all have free will and the path that you were on that time might not be the path you are on the next minute. Our minds change all the time and so do our actions. I also used to practice reading cards and smoke and many other sorts of divination. The mother of my children had a first love and his name was Joey. She loved him more than me and I always knew this and he would start to hang out with us and ask me questions about brujaria and how he was skeptical and 1 time he wanted to know his future and how he was going to die. I asked him, “Are you sure?”

He said yes with reluctance but I asked again, “Are you Sure you want to know?” This time he said, “Yes!”
I went ahead and told him to grab a cigarette and light it and then give it to me. He did and when I got the cigarette back and started to study the smoke I saw the answer to his question and I was scared because of what I saw in my mind… seeing the future is not like you think it is, it’s like screenshots of time and what I saw was him dying soon like I’m talking months from when he lit this cigarette and dying in a car crash. After I saw what I saw I again asked are you certain you want to know? He said yes and that he still was not a believer so I told him you are going to die soon in a car crash and he laughed it off but my baby mama was there when I told him his future. I got stoned that night and totally forgot that he had asked me to read him his future and months passed and then we get the news that he died in a car crash and on impact was thrown out the back of the car window.

God rest his soul. He started becoming a believer later after I read him his future because I showed him a lot of what brujarias I could do. I could talk to my baby mama in her head and call her when she was far away and this was back in the early 2000s. I remember 1 time I took her out close to where Gold’s Gym is on Dove (McAllen, TX) by the apartments near the railroad tracks, but back then you had no road going from Nolana to Dove it was just land and a scrap yard or something..so we would have to go through the apartments and go by the canal to get access to a clearing that was there and I took him several times and on one occasion he asked me to show more proof of Brujarias so I sent my baby mama down out far from us and he stayed with me. She was maybe 30 yards or so from us and it was the middle of the night and the only light we had was coming from the Moon.

I told him to look at my baby mama, I’m about to call her with my mind and sure enough, she got up and started walking out the way. He was like “Bullshit” you all had this planned out or have a sign you do to each other, that’s how she knew.. I said come on dude you were right here next to me. So I sent my baby mama back out again and she sat with her back facing us this time and this time I told him to look at me and then I told him, “OK, I’m calling her.’ and sure enough she got up and came towards us. I remember 1 time when we went out there we found a chair at the bottom of the canal and it had blood on it and rags and rope. Not too sure what happened there, but it did freak us out enough for us not to go back for a while.

Have you ever spoken to someone in the head and had an entire conversation? I have several times and the last time was not too long ago it was maybe 4 months ago with my wife and we were in our a Jeep and I started hearing her and we started talking and we both looked at each other and we were like, “Is this really happening right now?” After a few minutes, I broke the silence and said did you hear me and she said yes and we talked about what we were talking about in our minds. The mind is a powerful thing.” – Charles LR