Our friends over at Phantoms and Monsters bring us this story from Hebbronville, Texas

I received the following account a few days ago:

Hello – I noticed your article about small dinosaurs in Hebbronville, Texas. This witness was not exaggerating because I have seen an unknown animal in a field here in Hebbronville.

It was April 2011 and I was walking along W. David St. to my friend’s house on Randada Rd. at about 5:45 PM. I had just gotten off work. On the side of the road where I was walking, I saw dust being kicked up into the air and moving along the field. Then the trail of dust was heading toward the road in front of me. I stopped walking not knowing what may be exiting at the road.

About 40 ft. in front of me was what I can only describe as a little T-Rex dinosaur, about 2-2 1/2 ft in height. It didn’t stop running as it dashed across the road into a smaller field. It was light reddish brown, stood on two legs and had a long tail that was straight out as it ran. There is no way that this was a lizard known to live here. It looked very much like the photo of the toy I found online. 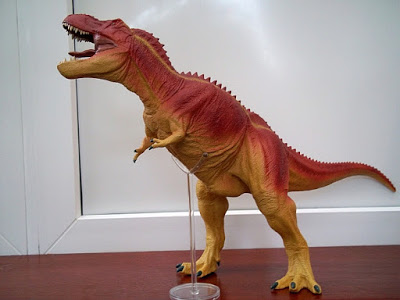 No one wanted to believe me. My friends and family think I mistook it for another lizard, but I know what I saw.

Until I read your article, I thought I may be going crazy. I do believe there are very strange creatures around here. My ex-husband used to talk about huge birds and walking shadows that he and others would see on a ranch south of Hebbronville. At one point several cattle would go missing without a trace. He would never stay there at night.

Thank you for reading. You can contact me. MG

I contacted the witness by text and later by telephone. I have mentioned previously that south Texas has a history of very odd sightings. The witness was referring to this post:

Hello Lon – A couple of months ago in summer, my friend actually saw a small dinosaur here in town, on a main street! It was evening when she saw it, probably around 8:45 pm. She was driving and noticed the dinosaur cross the street! She saw the shape clearly as it passed another cars headlights on the opposite side. She said oddly that the other car didn’t seem to notice as the creature passed. She tried to call me but her phone was out of minutes.

Just a couple months before I had actually heard a creature I could only describe as a dinosaur. I had been asleep, it was night, maybe around 1 or 2 am. I had awoken and just at that moment I heard an unfamiliar screech of something running by my window. We have an AC unit in the window so the window is basically open. I heard its footsteps as it ran by and it was heavy whatever it was. I could hear it clearly on the ground. As it ran further away I could hear it screech again! It was like nothing I’ve ever heard in my life! It was loud too and I wonder if anyone else heard it or saw it. I live in an apartment complex. I just laid there in bed completely bewildered by what I had just heard. I questioned my sanity and if I had heard what I thought I heard. So when my friend saw the “dinosaur” she was excited and wanted to tell me because of what I heard. I’m only sad I didn’t get to see it too. We both questioned our sanity. These stories you posted help me feel better and not so crazy. MR – Hebbronville, Texas