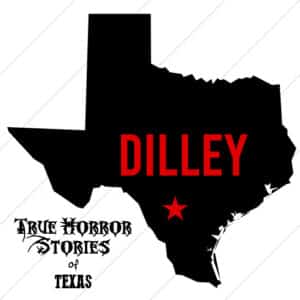 “Back in late 2013, my family was working in the oilfield in Dilley, Texas. Because we had kids we decided to rent an old house off Martin Branch Rd. (It used to be an old chicken farm.) One evening my dogs were going nuts, so I went outside to see what was getting them all hyped up, but didn’t see anything.

After going to check on both dogs, I turned around to head back to the front porch and in front of me kinda crouched down next to a tree, was a human-sized and shaped, black creature. It stopped me dead in my tracks, and it appeared to be looking right at me (although I couldn’t see its face.) It then made a snort or sniffing sound and jumped straight up into the air.

That’s when I realized it had a long black jacket that covered almost the entire length of its body. After what seemed like an eternity (in actuality it was probably more a matter of 30 seconds or less) the fear in me let up enough that I could move, and I turned the flashlight that I’d been holding the whole time on and shined it up into the trees. Because that was the only thing that made sense, was that it had to of jumped into the tree. But nothing. It was gone. I never saw it again and thought I was crazy for the longest.” -Shannon