“Mysterious ghost lights haunt this isolated road in the heart of the Big Thicket.  A unique part of Hardin County is also one of its most mysterious, fascinating and out-if-way places: The Ghost Road.
The Ghost Road is situated in the heart of the Big Thicket. It begins at a bend on Farm-to-Market Road 787 that is 1.7 miles north of the intersection of FM 787-770, near Saratoga.

Trees growing on both sides offer a natural canopy as drivers travel down the long dirt road.  Its original name is the Bragg Road, named after the town that was in that area at one time. The name Ghost Road was attached in this century after a number of tales that center around a ghostly light that is said to be seen on certain occasions at night. 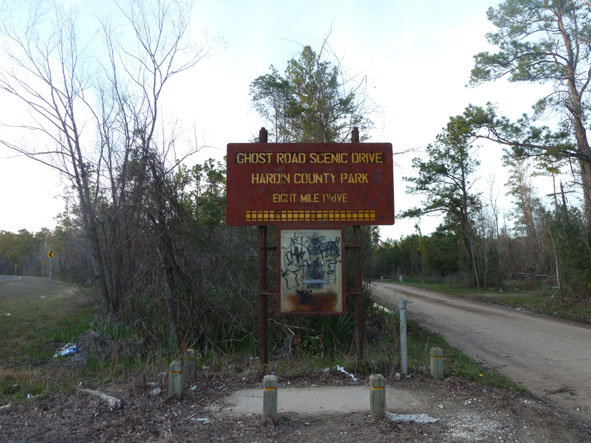 The section of area was just part of the Big Thicket, thick with native and underbrush.  In 1902, Santa Fe Railroad hacked a survey line from Bragg to Saratoga, bought right-of-way and opened the Big Thicket forest with a railroad, and the Saratoga train began its daily trips to Beaumont, carrying people, cattle, oil and logs. When the area’s oil booms and virgin pine gave out, road crews pulled up the rails in 1934, the right-of-way was purchased by the county and the tram road became a county road.

Tales of a ghostly light gathered steam in the 1940’s, ’50s and ’60s as more people traveled to the road.  Explanations on the Ghost Light (or Bragg Light as it was called originally by locals) are varied and descriptive. Some people believe the light is the reflection of car lights while scientists believe it is a gaseous substance. Of course the best explanations are left to the imagination.

One story about the light is that it is a mystical phenomenon that frequents areas where treasure is buried and that Spanish conquistadores are looking fo the golden treasure.

Another story is that the light is a little bit of fire never extinguished after another famous historical spot in the county, the Kaiser Burnout, or it could be the ghost of a man shot during the Burnout.
Still another story is about a railroad man who was decapitated in a train wreck when the railroad was still in place. The light is the body of the man looking for his head which was never found. The light could also be the night hunter who got lost in the Big Thicket decades ago. The hunter still wanders, searching for a way out of the Thicket.

A story that really gives you chills, is the one about the husband looking for his bride. The story goes the couple was honeymooning at the Bragg Hotel, which used to be at the end of the road, and by mysterious circumstances the bride was murdered. The light is the groom who continues to search for his bride’s killer.

Whatever the light is, its presence, or the thought of its presence, has been powerful enough to generate enough interest to make sure the Ghost Road remains as it is, an important part of Hardin County history.

To reach the Ghost Road, take U.S. 69 at Kountze to FM 326, from there take the turn onto FM 770 which will take you diretly to Saratoga. Go through Saratoga and at a right on FM 787 turn, the Ghost Road is not far off the beaten path.”

This article contributed by The Silsbee Bee