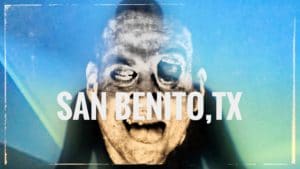 Our next story comes to us from San Benito, TX, located in deep South Texas along the Texas-Mexico border.  Check it out!

“We bought our first home in El Ranchito Subdivision, San Benito Texas. Being a history freak, there’s a lot of historical markers along Military Highway and our house was the distance of 2 long blocks from this highway. The house was old and sat on a long acre so we had plans to rebuild and tear down the old. The minute (it seems) this “ghost” found out things started to happen. The noises started…pacing around the house, the dishes being moved about in the dish rack, silverware also being shifted in the dish rack, the slamming of doors etc., so we had the house blessed, salted around the house and even did a protection over the 4 corners of the property.

As time passed, these things became a norm until the shadow man started becoming visualized, but only to certain people. One night, my cousins came over and from outside my house she texted, “who’s at your house?” I said, “Nobody.” and she said, “There’s a man sitting at your dinner table.” and I said, “No, I’m sitting at the table, but nobody else is here.” and she said, “He’s sitting opposite of you!”

I got chills and went outside. On another occasion, my nephew was passing one of the bedrooms on his way to the bathroom and came back and asked, “Who’s sleeping in Angie’s room?” I said, “Nobody, but us (Souse and I) is home.” and nephew said, “There’s a dark man asleep in her bed!”

By chance, I got to see him once walking by the kitchen window, I thought it was my son, but when I called him, my son answered from the living room. On another occasion, my son was in the garage working out on a gym set and it was about midnight when he finished and he started his routine walkabout of the perimeter of the property when he saw a big black dog with red eyes laying in the middle of our pit bulls (we had 6) and the dog got up and jumped out of the pack and over the fence (6ft away from pack).

At that point, my son knew this was paranormal! The worst one was one night we were barbecuing (every Friday) and as dusk came so did the owls (lechusas). Within an hour we were surrounded by 11 (on the trees and fence). Our neighbors and my dad were also there to see that one…the BBQ was over!!

The last straw was when my husband became possessed by this spirit and he went on a rampage, beat me up and hit the baby in the chest, cut my son and punched him and proceeded to drive my son’s hummer thru our house!! My husband became estranged and we separated for the obvious reasons, but one night the activity was at its worse and my father, son, daughter and I were outside the house as the activity became less intense when we stayed out. My dad decided that if we started a prayer and finished it maybe it could help. So we did the prayer, but when we went inside the activity became even more intense.

My son had gotten a very nice camera for Christmas and decided to take contrasting pictures of water in the night (I was watering plants). He must’ve taken like 30 pictures of water sprays, drops, gushing water etc… and so about 3 am we walked into the house and it was perfectly still! We all hunkered down in the living room and fell asleep. The next day we went to Walmart to develope the pictures and there was a nun about 2 people behind us in line.

As we got our pictures, we noticed on 3 of the pics there was a green zipping light, erratic and just moving. It was then the nun saw the pictures and asked if she could have a copy and we asked why and she said, “Whatever is in your house, Archangel Rafael was there!! A month passed before a priest from the Catholic dioceses called about the pictures wanting to verify them and we told them what we knew and they came over to “investigate.” We moved out of this house shortly after, we never looked back! Good riddance!” -Jodie

Thank you for your story, Jodie.  FYI, we reached out to Jodie to see if she still had the pictures, but she has not responded, yet.  We will keep you posted.  Have any of you ever experienced anything like this before?  Leave us a comment below.