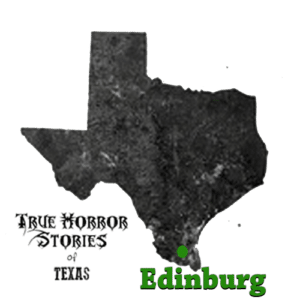 “When I was about 20 years old a friend and I were driving down University Dr in Edinburg. It was about 12:30 or 1 at night when we noticed a tall man walking down the side of the road. He had long hair, was wearing a tattered trenchcoat, and was carrying a large hand axe. He was walking kind of fast as if he was angry and in a hurry. My friend and I freaked out as we passed him, so we went around the median to try to catch another glimpse. As you know, it’s a little ways until you can cross over.

We crossed over and on our way back, we noticed he was still there on the opposite end. We finally turned around and made our way back to where we originally saw the figure. However, when we got back to where he would’ve been, he was gone. We both freaked out and booked it. It’s even more freaky because there was absolutely no place he could’ve gone in the time it took us to get to where he was, as it was a very large area with no buildings or cross streets.  It’s been years since that incident, but it still chills me.” -Will