This story comes to us from San Antonio, TX from a dear friend of True Horror Stories of Texas, Robert Limon of Rigor Mortis Paranormal.  Check out their website https://www.rigormortisparanormal.com 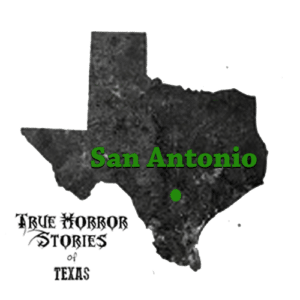 “My mother told me a story when I was a kid, about when she was growing up in San Antonio, TX in the early 1960s.  She was around 13 years old and she lived next door to a lady who practiced witchcraft.  A bruja.  She was a mean bruja.  She would bully my grandmother constantly.  She knew my grandmother was deathly afraid of her and very religious.  She was always leaving lit candles with strange writing on my grandmother’s porch or she would stand in front of their house chanting spells laughing at my grandmother and mom.  One day, when my mom’s brother, Tommy, had just gotten back from the Vietnam war, he was staying with my grandmother.  They were all awoken early in the morning by a loud whistling outside.  When everyone stepped outside to see what was going on. There standing on the porch was a huge bird with an ugly face that almost appeared human.  Like an old lady’s face.

It started to fly around my grandmother’s house whistling very loud.  My grandmother was frightened beyond belief.  She said it was a Lechusa come to curse all of them.  She dropped to her knees, pulling my mom down with her and started reciting the “Our Father” prayer and the Rosary prayers.  My mom’s uncle, Tommy, got extremely pissed when he saw how frightened my grandmother was.  He grabbed a shovel and started chasing the Lechusa, swinging the shovel at it and cursing at it.  This must have done the trick because the Lechusa flew away.  Uncle Tommy then made his way to the bruja’s front yard and started cursing her name.  Things got a little quieter.

Then about 6 months later, uncle Tommy left for California getting into a car accident that killed him.  My grandmother thinks the witch put a curse on him.  The very last encounter my mom and grandmother had with the witch was when she arrived knocking on the door of my grandmother asking for help.  The bruja was so thin she was like a skeleton also very pale and sickly looking.  My grandmother had a big heart.  Instead of telling her to go to hell, my grandmother helped her inside.  I think because she was still afraid of the witch.  Once inside the witch told my grandmother that she had angered an even more powerful bruja and a curse was put on her.

Then the witch started vomiting human hair.  She started choking and gagging.  Mom told me grandma almost passed out when she saw this.  They called for an ambulance and even the paramedics didn’t know what was going on.  Then they took her to the hospital where she died that day.  From that day on, my mom claims to have been plagued by ghosts and having paranormal activity in some of the houses she moved into.  I remember a very haunted house we lived in when we were kids but that’s another story I’ll tell you later.  I think that bruja placed a curse on my mom. Thank you”- Robert Limon